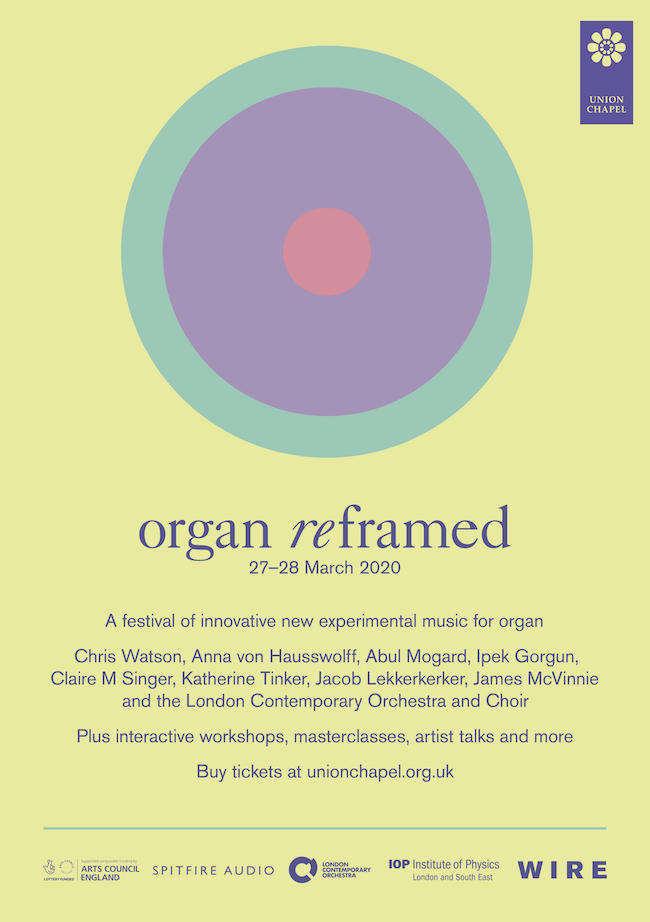 On the 27th March 2020 the fourth annual organ reframed returns to Union Chapel with a programme packed full of innovative music. Alongside headline performances, the two-day international festival will also feature talks, masterclasses, an interactive soundscape and family-friendly workshops.

The Saturday afternoon will see the chapel transformed by sounds and rhythms echoing the seasonal shift of the Highland year. This free installation by Chris Watson and Claire M Singer will feature the wind, weather and animals of Scotland. These sounds will interact with the organ played by James McVinnie, Katherine Tinker and Jacob Lekkerkerker.

The festival concludes on Saturday evening with the world premiere of Voci del Vento by Chris Watson and Claire M Singer. This collaborative work will combine organ, field recordings, modular synths, the London Contemporary Orchestra and Choir to transport audiences on an epic journey from pole to pole.

Chris Watson, is a founding member of the influential experimental music group Cabaret Voltaire. He is famously known for his recording of wildlife sound for David Attenborough’s documentaries and his ground-breaking work on Grammy nominated Chernobyl, with Hildur Gudnadottir. His 2003 release Weather Report was voted as one of the 100 best albums to hear before you die by The Guardian.

Speaking about the festival Chris Watson said, “I’m thrilled by the prospect of bringing the natural world into the musically inspiring environment of Union Chapel and collaborating with Claire M Singer for the next Organ Reframed”. Claire M Singer is known for her experimental approach to the organ and for her critically acclaimed releases on the prolific label Touch.

organ reframed is brought to you by Union Chapel Project, in partnership with the London Contemporary Orchestra and Spitfire Audio with generous support from Arts Council England and the Institute of Physics.

Part One: The winds catching the conifers – and the secrets of the dawn chorus, Aug 26 2019. Chris Watson, president of the Wildlife Sound Recording Society, joins David Oakes in this episode of Trees A Crowd

Part Two: If a podcast is recorded in a forest, and no one is around to hear it… Sept 9 2019. Chris Watson, president of the Wildlife Sound Recording Society, joins David Oakes in this episode of Trees A Crowd

Caught by the River at Port Eliot Festival 2019 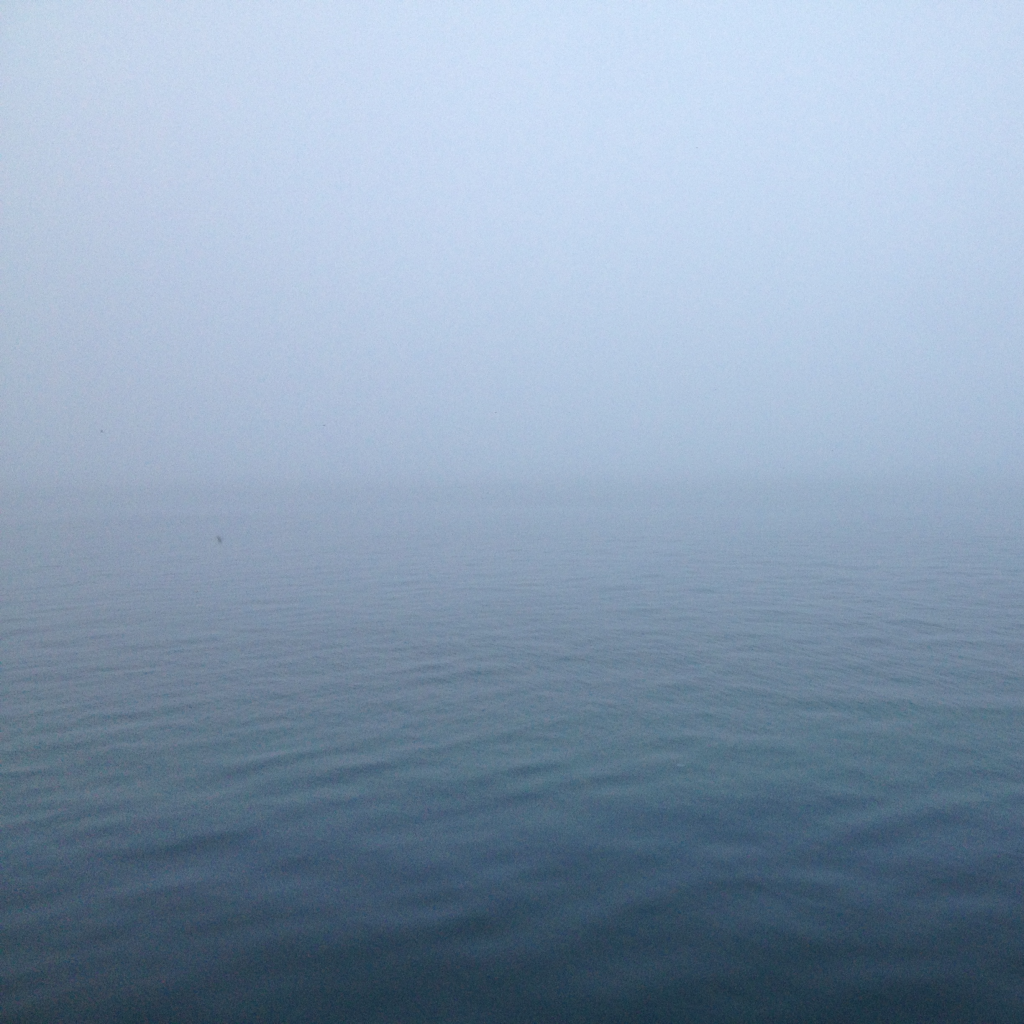 Ocean Soundscape, as played on the main stage at The Glastonbury Festival on 30th June 2019 immediately prior to Sir David Attenborough’s address, describes a journey from the Antactic to the Arctic…

Songs of marine mammals, including bearded and weddell seals, recorded and composed by Chris Watson.

A signalman on a remote stretch of East Yorkshire railway is visited by a lone traveller in this drama-documentary written by poet Ross Sutherland. Inspired by a Charles Dickens ghost story, and featuring nature recordings by renowned wildlife recordist Chris Watson.

The Oxmardyke Gate Box is one of the last in the UK to use antiquated mechanical bells to carry semaphore-style messages up and down the line. Soon this system of “absolute block signalling” will pass into history, as computers take over. The bells, like the humans who listen for them, will no longer be needed.

In this feature fusing fact and fiction, the poet Ross Sutherland visits Oxmardyke to meet Dave Beckett, one of the last operators to use the bells. From their elevated position, the pair gaze out over the hinterland near the muddy Humber estuary. It’s an area of villages with Anglo-Saxon names: Gilberdyke, Broomfleet and Saxfleet, with remains of the monastery where the Knights Templar would return after international travel. The flat, reclaimed land has an eerie quality, accentuated by a strange local phenomenon known as a temperature inversion (where high density cold air becomes trapped by warm wetter air) causing sound to carry further, meaning passing trains loom larger and echo further than they ordinarily would. 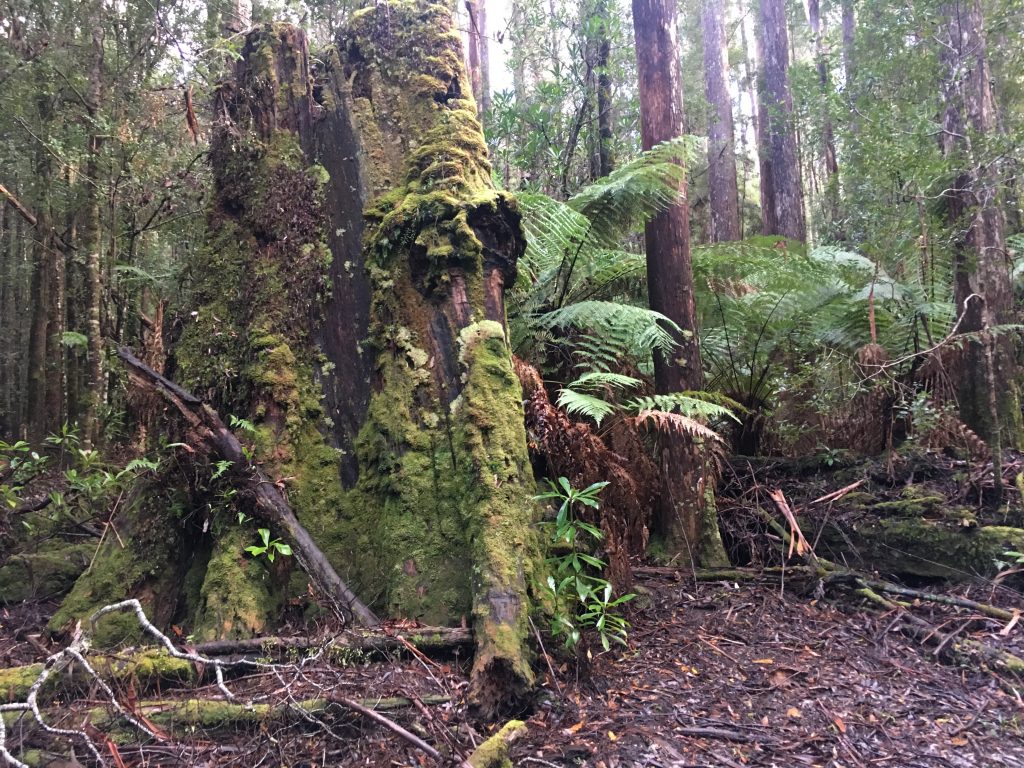 Venture south and explore large-scale public art in Tasmania’s Huon Valley. Project X will present a series of major artworks in the Huon, with the aim of bringing visitors back to the south in the wake of the bushfires that recently ravaged the island.

Project X will open at Dark Mofo 2019 with Hrafn: Conversations with Odinby Chris Watson and The Wired Lab. More info about Project X artworks will be announced soon.

A DarkLab project, supported by the Australian government and the Tasmanian government through Tourism Tasmania, and Mona. DarkLab acknowledges the support of Tasmania Parks and Wildlife Service, and Events Tasmania.

The Shape of a Circle in the Mind of a Fish with Plants: A Festival on Plant Intelligence
EartH Hackney
11-17 Stoke Newington Road London N16 8BH
Sunday 19th May 1-11pm

Chris Watson, Salmo salar – The Three Realms, on location Croquet Head, commissioned by Serpentine Galleries and L-Acoustics on the occasion of The Shape of a Circle in the Mind of a Fish, 2019.

“Most people who bother to think about plants at all tend to regard them as the mute, immobile furniture of our world—useful enough, and generally attractive, but obviously second-class citizens in the republic of life on Earth.” (Stefano Mancuso)

The Shape of a Circle in the Mind of a Fish with Plants is a multidisciplinary festival that brings together artists, scientists, writers, anthropologists and musicians for talks, performances, screenings and listening sessions that raise and address some of the most urgent questions facing all of us.

Wildlife recordist Chris Watson begins a three-part journey into the sonic environment of the ocean, celebrating the sounds and songs of marine life and investigating the threat of noise pollution

Does a second feel the same for a fly, a bird, or a swordfish, as it does for me? Geoff Marsh drills into the science of time perception within and between species.

After a devastating earthquake, Nga, an old elephant and probably the last of his kind, and Sanra, his mahout, embark on a journey to find the mythical elephant’s graveyard. A story of discovery and mourning in which the spectator becomes the protagonist, the film follows the duo as they are stalked closely by a group of poachers, who begin to die one after another under mysterious circumstances.

Carlos Casas’s Sanctuary offers a mesmerizing sonic and visual cinematic environment that immerses the audience in the sounds, textures, and hues of the jungle. Projected on the mega-screen in EMPAC’s Concert Hall, and featuring live Ambisonics, Wavefield Synthesis, and infrasound to induce a deep sense of physical closeness with the elephant, Sanctuary presents a unique sensorial experience that collapses the boundaries between art, nature documentary, and adventure film.

Chris Watson collaborated with the bioacoustician and elephant communication expert Joyce Poole to record the acoustic sphere of elephants. Tony Myatt developed the infrasound speaker and implemented the spatial audio. Both will perform live on the speaker systems installed throughout the hall. This is the US premiere of the project, which was previously presented at the Fondation Cartier, Paris; the Tate Modern, London; and the Kunstenfestivaldesarts, Brussels.

Okeanos takes the audience on an auditory underwater journey around the globe. Years of recordings from pole to pole will be performed with three audio systems in the Concert Hall: a dome of 64 loudspeakers used to project sounds around the audience in an Ambisonic environment, a Wave Field Synthesis array, consisting of hundreds of small speakers placed above the audience, and a custom-built infrasound speaker used to create the lowest frequencies, which can be more felt than heard. The composition will include songs, signals, and vibrations from the smallest crustaceans to the loudest and largest animals ever to have existed.

Chris Watson and Tony Myatt will perform a version of the work specifically developed for EMPAC’s Concert Hall and its audio systems. This new version will also integrate sound materials recorded on the Northeastern coast of the US and humpback whale recordings from the Silver Banks (Dominican Republic).

Shadows and Reflections: the annual collection of postings in which our contributors and friends consider the events that’ve shaped the past twelve months. As we begin the new year, Chris Watson looks back on 2018 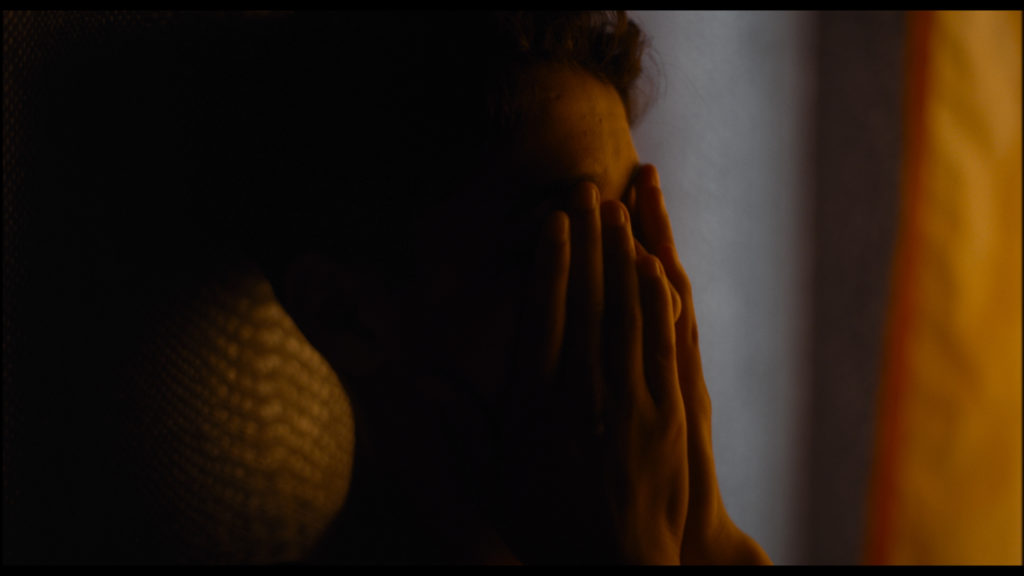 World Premiere at Berlinale Panorama 2019; HELLH LE has been selected for the Panorama program of the Berlinale 2019

Three starkly different people deal with the aftermath of the terrorist attacks in Brussels in May 2016. A Flemish doctor, whose son is a fighter jet pilot on a mission in the Middle East, is forced to confront his loneliness. A young man from Algerian descent is asked by his brother to do him a deceivingly simple favour. An Italian woman, who works in the heart of the European Institutions, is slowly losing control under the pressure of her demanding life.

The same question that seems to haunt the city, looms over their lives: where do we go from here?

Sound recordist Chris Watson captures the changing soundscape from dawn to dusk in the Kalahari Desert in south western Africa. As the light fades, you can see very little but hear everything; from the close up sounds of insects to the far-carrying contact calls of spotted hyenas.  Producer Sarah Blunt.

Made for 4 Extra. Wildlife recordist Chris Watson examines some of the ways technology has changed the radio we listen to, from early experiments in sound to the podcast explosion.

To mark the centenary of Armistice Day, Boiler Shop presents ‘100 Years’, a weekend of unique events curated by the venue’s Richard Clouston andDaveid Phillips with author and editor of The Quietus, Luke Turner.

In the very early hours of Sunday 11th November, world-renowned sound recordist Chris Watson will present ‘A Nightingale on The Western Front’, a multichannel sound composition recorded in the battle sites of Flanders. This event will run from 5:00am to 7:30am on the Mezzanine for a limited audience of 80 people, followed by breakfast and a Q and A session with Chris andLuke Turner. Then a very special live show from Newcastle’s own Richard Dawson.

The weekend will conclude with a live show from the legendary English folk singer
Shirley Collins, who released her first album in 30 years, 2016’s brilliant ‘Lodestar’.

We hope 100 Years will be a poignant reflection on sacrifice and a dignified celebration of peace.

Berwick Film & Media Arts Festival presents the premiere of Enceindre, a new commission and first collaboration between artist filmmaker Luke Fowler and acclaimed sound recordist Chris Watson. Enceindre is a study in film and sound of two 16th century fortified cities: Berwick in the North-East of England and Pamplona in the Navarre region of the North of Spain.

If fortifications are considered ‘the body of the place’, what does it means to live in a body that is outside of time and without purpose? Could these fortress towns be considered hetrotopias? Or are they, as the writer WG Sebald vividly describes, alien structures denuded from human history? Enceindre adopts an infra-sensitive approach to place, drawing on unheard acoustic perspectives and lucid camerawork to propose a new framework in which to consider these anachronistic landscapes.

The film’s world premiere at BFMAF 2018 will be immediately followed by a ‘dark cinema’ version of the film with an alternative soundtrack diffused live by Chris Watson.